The Story So Far…
Our story begins several decades after the black swan spread her wings and ushered in a new age of winter. The party are clambering up the side of a glacier, on the run from the Saviors of the Heartland, a militant group that enslaves metahumans and uses them in their crusade against vampires and wendigo. The Saviors have been after them ever since “the Incident,” fur long months ago. We’re heading deep into the frozen wastes to the north, wendigo territory. Alexander has picked up Eddie’s several hundred pound trailer and is leaping up the glacier while the others trudge on behind. Growing board of the climb, Nicodemus steps round a corner and vanishes, reappearing at the top, “What’s taking you all so long?”

We know there are about thirty of the Saviors following us, and they’re tough, like if the Knights Templar ran a Spartan training camp. Two of them are wearing old-tech battlesuits, and they’ve got two metahumans with them, one who generates lightning whips, and the other gets stronger, faster, and tougher the longer he fights. In short, this is not a fight we want. Not that we really want any kind of fight, since most of the group are pacifists, and Nicodemus just doesn’t like unnecessary effort…
Shearing Winds and Sheered Cliff
Alexander, Eddie, Nick, Doc, and Kurst
Sentinal Butte, 26°F, Light Snow
January 27th, 37 AB, 10:00am
Somewhere in what used to be South Dakota


When Alexander’s player asks if there is any shelter nearby the GM rolls a natural 3. It turns out there’s a medium-sized castle that Nick was leading them to all along, and after a 19 on a retroactive reaction roll, it’s inhabitants are all his bestest buddies. Last time he was here he blessed their land to make it fertile.

Nick greets the man at the door, a certain Mitchell Poole, as an old friend, introduces his allies, and asks if they can go inside, but before he does so Eddie interrupts. “Nick, can I talk to you for one second?,” “Eddie, anything you have to say can be said right here, I have no secrets from my friends.” Which is a blatant a lie as possible without actually being untrue. Eddie goes on to explain that they’re being followed by some very nasty men, and the others chime in. Fortunately, last time he was here, Nicodemus set up an illusion that renders the whole structure invisible when desired, an illusion in which the inhabitants have total faith, and the rest of the party has precisely none. Kurst performs some counter-tracking, with some complimentary skill rolls from Alexander and Jacob, rolling a critical success to cover the party’s tracks, and a critical success to lay false ones. (Success by 17 and 19 respectively, even with a -9 to do it quickly.)

They’re led into a common room with multiple fireplaces, Eddie and his trailer through a separate, bigger entrance, helped by a couple of children, who he hands little wooden toys that seem to come to life. Once inside they’re fed multiple delicious meat buns, of which Kurst eats the lion’s share. There are a couple of pregnant women, and Jacob goes over to inspect them, make sure everything’s okay. Eddie begins to inspect every inch of the castle, to make sure it’s sufficiently well built, worried that we’ve put these people in unnecessary danger. Alexander cautions him to rest, so he is best prepared in case the Saviors do see through the illusion, but Nick tells him that this is Eddie’s way of resting, of putting his mind at ease.
A young girl with a mass of frizzy red hair sits down opposite Alexander, mimicking his posture. He carefully takes a pebble from the ground and places it between his two great hands, after meditating for a second, he opens them, revealing a sparkling gem, which he gives to the child. Meanwhile over in the other corner, Nick is putting on a far flashier performance with some magic. Jacob’s cat (or perhaps he’s the cat’s Jacob), is also showing off, hovering around and leaving its trail of rainbows (I’ve said it before, I’ll say it again, I hate you Christopher ~Hal) (It’s okay, Hal. It’s goingto get so much more memetic before I’m done. You’ll be lucky ifI don’t give it Snatcher (Cheezburgers) ~Christopher.)
Eventually all of them get some rest, Eddie up in a little sniper’s nest he’s made for himself. He only needs a couple of hours sleep, and somehow knows exactly when the Saviors are going to arrive, so when there are only two hours left, he wakes us all up. Eddie, Alexander, and Kurst all head up to the roof to see if the Saviors go on by, which, after a tense moment, they do.
Eddie uses Clairsentience to follow them out to the end of the false trail at the other side of the glacier, when it starts snowing heavily, they look very frustrated. From inside castle, smugly sipping brandy, Nick does the same with a quick spell. Then with a second spell he creates the illusion of a scent in the area, the scent of blood. A few seconds later, there’s a woman’s scream. A few of the Saviors go off to investigate and they’re dragged under the snow, where a slow, crimson stain begins to spread. More and more of them were ripped to shreds, as the wendigo attacked, attracted by the smell of blood. Far away, inside the castle, Nicodemus smiles.
With his Clairsentience, Eddie also saw all of this, but the only ranged sense he can’t project is his sense of smell, so he didn’t know the cause. He mentioned to Alexander and Kurst that something was wrong, they were being slaughtered by wendigo. Alexander promptly leaped off the side of the building to go help, followed by Kurst, who wanted nothing more than to tear a wendigo apart, and Eddie limped along behind.


When they arrived there was just one survivor, a young boy, severely wounded, who Alexander picked up and sprinted back with. Meanwhile, Kurst pelted the wendigo with silver arrows, driving them off now that they’d eaten their fill. He then went over to the bodies of the few wendigo that had been killed, and began to slash at them until they reached the consistency of mincemeat. However, the smell of blood was starting to get to him, and a change came in his eyes, he ripped an arm off one of the bodies, and began to chew on it… Or at least he thought he did, seeing what was about to happen through his scrying spell, Nick projected an illusion into Kurst’s mind to make him think that’s what he was doing, when in reality it just looked like he was eating an invisible sandwich. 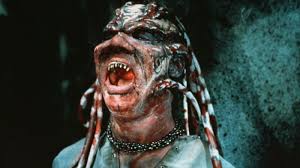 Eddie eventually managed to calm him down, and Kurst went to recover his arrows… and rolled a 3, getting all of them back, along with all of the Saviors’ equipment in tidy, carefully arranged packages. Meanwhile Eddie built a sledge to carry all this gear, and the two of them began to make their way back.

Back at the castle, Alexander had returned with the injured boy, and brought him to Jacob, who performed first-aid, assisted by Alexander. He also used some of his healing power, and between them they managed to stabilize the him. Jacob then attempted to regrow the boy’s arm, rolling an 18, but 3 Karma later, that became a success, and the arm was restored. Then after another healing roll, he managed to cure the wendigo virus that the kid had been infected with, before heading off to crash. He’d spent a lot of Fatigue Points.
We ended it there.
After Action Report (Hal)
This was a great first session, the team seemed to work together really well. I think there’s a lot of things I personally could have done better, but you live and learn. For example, rather than an illusion I could have just improvised a Telesend to message Kurst and try and snap him out of it that way, and with Natural Leader and a high level of the Mastermind! Wildcard (which mostly about leading) I’d stand a very good chance of managing. I also didn’t spend a single point of Karma that session, even though I have a lot. We didn’t need them in the end, but spending them to make some Illusion rolls critical successes would have made us a lot safer.
After Action Report (Christopher)
Like Hal said – this was a good start. It wasn’t where I was planning to go, but so few of my games do. I was rather pleased with how everything just seamlessly melded together. This will be the fourth campaign in the same setting that has benefited greatly by my long lead time for character creation and formulation. That extra month of making things work so there are no surprises nearly ensures a game will not flame out rapidly.
Having to come up with various odds and ends on the spot kind of sucked – but I’m competent enough switching gears that (“I’m better when I move!”) that didn’t cause too much trouble. It’s clear to me that the players want to push survival for themselves into the background and really push “We have powers and should use them for the greater good” to the front. If that’s the case I’m planned for this and can easily accommodate them. Overall, no plan survives first contact with PCs.
I’ll need a few more sessions to really gauge what is going on and readjust my story arcs from there.
Session Soundtrack
“All Along The Watchtowers (Instrumental)” by The Forest Rangers ft Gabe Witcher (as the session “closing song”)
“Let the Bodies Hit the Floor” by Drowning Pool (when Faust sets up the Savoirs)
“White Winter Hymnal” by Fleet Foxes (as the session “opening song” when the PCs are trekking across endless snow)
“My Hero” by the Foo Fighters (as Alexander leaps off the building rushing to help the Savoirs)“Nyan Cat” by Sara Jane
“Too Much Blood” by The Rolling Stones